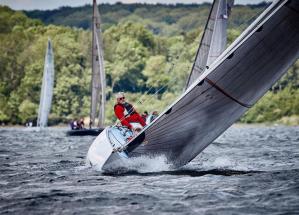 With good, but increasingly unstable weather conditions, the Robbe & Berking Sterling Cup 2019 took place at the Flensburger Segel Club in Glücksburg  over the weekend of 13 – 15 June.

Sadly Andreas Haubold’s “Marianne” was forced to pull out prior to the start of racing due to mast problems, which left five Sixes to compete for the trophy.