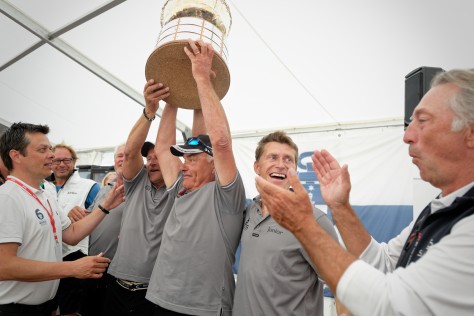 Sadly the final day of racing at the 2019 Sinebrychoff 6 Metre World Championship in Hanko was blighted by light winds for the second day running and no racing was possible. Fortunately six of the eight programmed races had been completed and the winners of the Championship could be declared.

His Majesty King Juan Carlos of Spain’s ESP Bribon Gallant, helmed jointly by His Majesty and Pedro Campos and crewed by Inaqui Castaner, Alberto Viejo, Ropi Alvarez and Ross MacDonald, safely defended her Classic 6 Metre Worlds title by a seven point margin. As His Majesty and the team came to the stage to collect the prestigious Djinn Trophy there were rousing cheers and hearty applause as the King’s fellow competitors recognised the incredible achievement of this 81 year young sailor who only took up serious 6 Metre sailing in 2017 and has already won the European Championship and now two World titles. Second place in the Classic Division went to FIN67 Djinn helmed by Karl-Gustav Pihl and crewed by Georg Tallberg, Thomas Castre’n, Oscar Andersin and Hema Virkunen. Championship Regatta Chairman Ossi Paija and his local crew of Thomas Hallberg, Jonas Renlund, Sam Fagerlund and Kimmo Vijamaa sailing FIN80 Astree III took the final step on the podium in the Classic Division.

There are also a number of special trophies awarded at the 6 Metre Worlds and the first of these to be presented was the Lucie Trophy, for the highest placed boat with a female crew member. This year’s winner was not only a crew member, but also the only female helm in the competition. Violeta Alvarez was deservedly delighted to receive the trophy which not only recognised her own impressive achievement, but also that of her crew and her boat. Stella is the most recent 6 Metre constructed and this was her first international championship. Designed by Juan-K and first launched in 2017 the revolutionary design initially took time to optimise and master, but this week she signalled loud and clear that she has the ability to perform consistently well in both windy and light conditions, finishing the championship fifth overall – no mean achievement in a fleet of this exceptional quality.

The Baum & Konig Trophy for the highest placing boat in the Classic division with wood spars, white sails and a racing flag, and the KSSS Cup for the highest placed boat built to the first or second edition of the 6 Metre rule was won by US55 Lucie, helmed by Craig Healy of the St Francis Yacht Club. Built in 1931 to a Clinton H Crane design at the Henry B Nevins Boatyard in New York for the legendary America’s Cup skipper Briggs Cunningham who raced her to considerable success. She was fully restored by Matt Brooks just in time for the 2011 6 Metre Worlds in Helsinki and is without doubt one of the most beautiful classic sixes sailing today.

The Nelson Trophy for the highest placed boat designed between 1966 and 1979 was won by Canadian Adam Henley’s KS7 Toogooloowoo V, a 1970 Sparkman & Stephens design which is of particular interest as a first concept of trying to separate the rudder and keel. She was initially very successful but was quickly overtaken by newer boats during this period of very rapid design progress in the class.

The final formal presentation was of the Astor Cup, which is awarded to the highest placed boat with a crew member aged 25 years or younger, which this year went to Peter Harrison’s K12 St Francis IX, helmed by Andy Beadsworth and crewed by Colin Murray, Jana Zimmerhakl, Vince Bartlett and Misky Torvar.

In closing the prize giving, Race Officer Mikael Lindquist thanked the competitors for travelling from around the world to Hanko to compete and for being such wonderful competitors. The sailors in turn showed their genuine appreciation for the terrific job that Mikael and his team from the Hangö Segelförening have done in running the event despite the at times very challenging conditions.

And so the 2019 Sinebrychoff 6 Metre World Championship came to a close and the sailors set off on their journeys home with great memories of races sailed, stories told and friendships made and with happy smiles on their faces. The next international championship for the class will be the 2020 6 Metre European Championship, to be hosted by the Real Nautico de Sanxenxo on Spain’s spectacular Galician coast during the last two weeks of August 2020. Further details about the regatta will be published shortly at http://www.6metre.com.