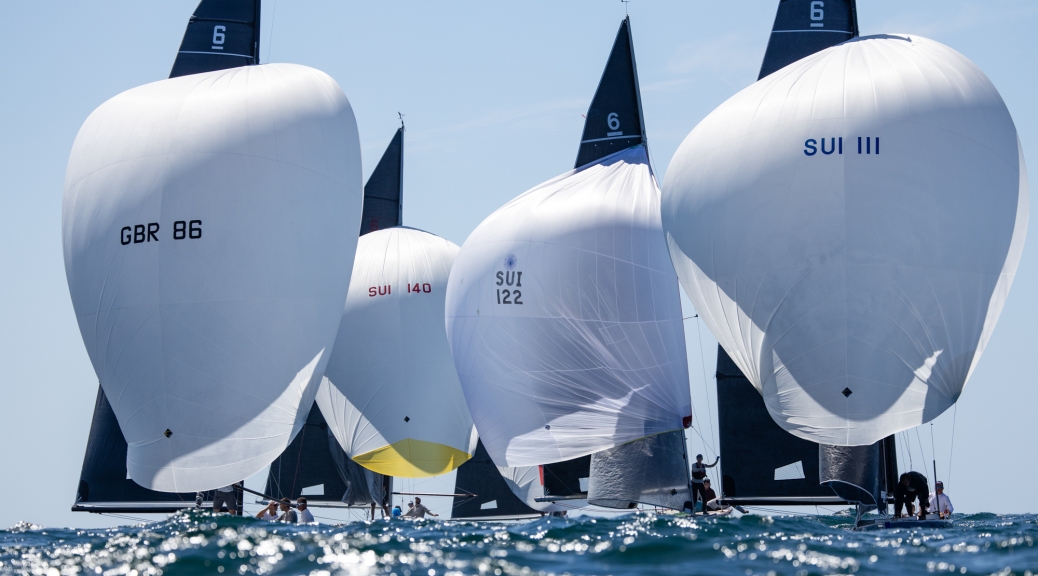 Cascais, Portugal – 6 September 2022 – The opening day of the 2022 Six Metre European Championship in Cascais produced champagne sailing conditions enabling both scheduled races to be completed in an eight to twelve knot westerly breeze which clocked gently right as the afternoon wore on.

A third in race one and a convincing win in race two put Portuguese Olympian Patrick Monteiro de Barros and his Pelle Petterson designed Seljm into the lead in the Open Division. Reigning Six Metre World Champion Momo, with owner Dieter Schoen of Switzerland at the helm, won the first racing in style from Violeta Alvarez’s Stella but was then over eager on the second start and had to return. Momo dug deep and fought back to sixth place, putting her into second overall. Fellow Swiss Jan Eckert’s Ginkgo Too finished fifth and second so counts the same points as Momo, but takes third place overall on countback.

In the Classic Division Ross Macdonald at the helm of Bribon 500 and Andy & Lisa Postle’s Nirvana gave notice that they will be the boats to beat. Nirvana took the first race from Bribon 500 with Thomas Kuhmann’s Hanko III third. In race two Bribon 500 took an early lead on the fleet which she then extend impressively all the way to the finish. Mauricio Sanchez Bella’s Titia took second and Nirvana was third. In the Classic Division overall standings Bribon 500 has a single point lead over Nirvana with Titia and Hanko III both counting eight points but Titia lying third on countback.

After sailing Patrick Monteiro de Barros commented “It was Cascais at its best. It was very good sailing, steady wind and it shifted a little bit but a great sailing day. We had a very good start and we had a strategy to go to the right which normally is the favoured angle. We had very good speed, the boat is going well, the crew is fantastic.”

The defending European Open Division Champion crew of Thisbee, owned by Michel Teweles and Philip Durr, came off the water relatively pleased with a fourth and third place, but were protest by Seljm regarding a tacking incident in race one. The jury found that Thisbe had been on starboard and converging with Seljm on port. Seljm was taking appropriate avoiding action as the boats closed, but Thisbe then tacked into the path of Seljm forcing them to luff head to wind to avoid a collision. As a result Thisbe was disqualified and ended the day down in eighth place.

Olympic Flying Dutchman Gold Medallist Alejandro Abascal of Bribon 500 was also very pleased with the racing conditions today. “It has been a very nice day. Again very nice wind. We expected lighter winds but we had almost 13 knots so it was a very good day for sailing. I hope tomorrow we have the same as today as this wind is nice for us so more like today will be perfect.”

As well as running great racing the Clube Naval de Cascais is also doing a great job of the organisation and hospitality. The boats are moored in the Cascais Marina and each day club RIBs are on standby to tow boats which do not have their own support boat in and out of their berths. The club puts a high priority on the environment and runs an impressive online notice board and notification system to ensure paper is not wasted. A cold water station is located by the entrance to the club so that competitors can refill reusable water bottles at any time and everyone has been asked not to use chemicals when washing off the boats and to keep rubbish, and particularly single use plastics, to a minimum. The Portuguese are famous for their hospitality and the CNC is welcoming the sailors home each day with a generous spread of canapés and delicious local wines and beers, much to the delight of everyone competing.

The forecast for day two is for more light to moderate winds and the Race Committee has confirmed that it intends to get racing underway at 14:00 with races three and four of the series scheduled. Racing for the Championship continues until Saturday 10 September. A total of eight races are scheduled with five being required to declare a valid championship. Once six races have been completed a single race discard will be introduced.