The opening day of the 2019 Sinebrychoff 6 Metre World Championship brought sparkling sunshine and a lovely summer breeze building gradually from around 8 knots at the start of race one to 18 knots by the end of race two. The the Hangö Segelförening’s Race Committee provided near perfect windward leeward courses and the 47 strong fleet, which is divided into the Open Division for Moderns built after 1 January 1966 and the Classic Division for boats built before 31 December 1965, enjoyed two fabulous races.

With two of the scheduled eight races completed defending World Champion Philip Durr’s SUI77 Junior, a 1981 Pelle Petterson design subsequently reconfigured by Ian Howlett with a new keel in 1989 and new rudder in 1991, has given notice to the Modern Division that she would very much like to claim her sixth world title by taking a first and third in today’s races to lead the regatta overall.

In the Classic Division Henrik Lundberg’s gorgeous 1930 Tore Holm designed FIN12 Fridolin, winner of the 2013 Classic 6 Metre Worlds, leads the pack thanks to a pair of second places. Three points behind her lies FIN67 Djinn, designed by the legendary Olin Stephens in 1938 and being helmed this week by owner Karl Gustav Phil. 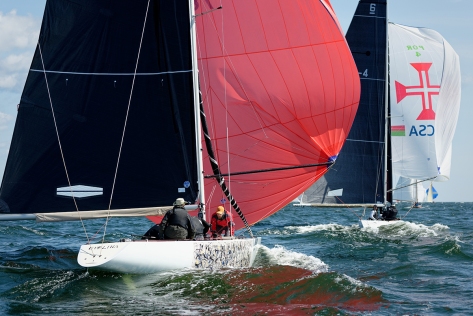 In third place is Thomas Khumann’s US96 Hanko III which was designed in 1955 by Bjarn Aas and underwent major work at Jespersen Boatbuilders in preparation for the 2017 Worlds. She scored a fourth in race one and crossed the line fifth in race two, but only a few moments later a rigging screw failed and her mast went over the side. Smart work by her crew and nearby support boats saw the debris rapidly recovered and the boat on tow. The race is on to bring a new mast to Hanko this evening and re-rig it overnight. The crew won’t be getting much sleep tonight, but the camaraderie of the 6 Metre fleet is strong and many of their competitors have offered help and support to get them out racing again so fingers crossed they will be with the fleet again tomorrow.

His Majesty King Juan Carlos of Spain’s ESP16 Bribon, the reigning Classic 6 Metre World Champion helmed today by Pedro Campos, sailed beautifully to win race one, but fared less well in the stronger breeze of race two. Unusually for this beautifully rehearsed crew, they dropped the spinnaker over the bow at the second leeward mark and it took some time to unravel the resulting mess. They finished the race in tenth place which leaves them fourth overall going into the second day.

Hanko and Bribon weren’t the only boats to suffer bad luck and gear failure. Beat Furrer’s Modern SUI104 Temptation 3 was looking all set for a third place after the first lap of race one when they misjudged a cross, hit Michel Teweles’ SUI111 Thisbe and were forced to do turns. Fortunately neither boat was seriously damaged and Thisbee went on to finish fourth in the race, but Temptation 3 limped home last.

Peter Harrison’s K12 St Francis XI with Andy Beadsworth at the helm had a series of mishaps including a failed halyard clutch and lost sheet. In race two they came storming off the line to lead the fleet up the beat, but then over stood the first mark badly and found themselves down in twelfth place. They did all they could to recover but the fleet is so well matched that eighth was the best they could achieve.

The crew of Peter Hoffman’s 1938 Olin Stephens designed Goose, arguably one of the most successful 6 Metres ever built and being helmed this week by Canadian Olympian Eric Jespersen, also had a somewhat trying day. At one point the clutch on their spinnaker failed and all three forward crew found themselves desperately hauling the sail back out of the water, only for it to fill before they had managed to cleat it and drag back out of their hands. They also blew an underdeck halyard turning block too which created another set of problems. Eric was pragmatic after racing, acknowledging that when you race boats that are over 80 years old gear will fail from time to time no matter how carefully you prepare.

But while a few boats had problems, the majority revelled in the spectacular conditions and the site of this beautiful fleet of 6 Metre yachts spread out before Hanko was truly impressive. With the oldest boat built in 1921 and the newest in 2017 there truly was almost a century of yachting history laid out for the many spectators to enjoy. 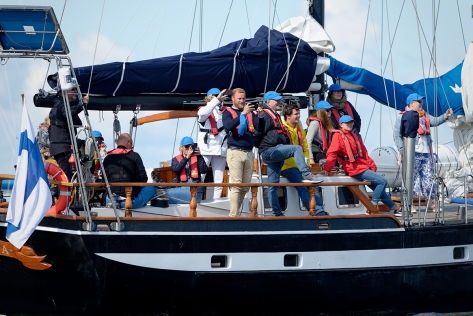 The Finns are renowned for their hospitality and back ashore the sailors enjoyed the the daily Sinebrychoff Aftersail Party, before each of the visiting international crews were welcomed by a local host team for dinner. This tradition is one of the great social highlights of each 6 Metre Worlds and is much appreciated by all the guests. 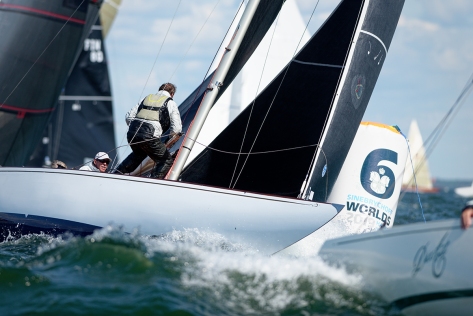 The forecast for day two of the regatta is for rain and potentially strong winds which are expected to range from the mid teens in the morning to over 20 knots by the end of the day. There are six further races planned with up to two races scheduled daily until Thursday 8 August. Friday 9 August is a reserve day which may be used if the full programme has not been completed by Thursday evening.