Day two of the 2019 Sinebrychoff 6 Metre World Championship in Hanko was a day of ups and downs for the 47 strong fleet as they took on races three and four of the eight race series. Fortunately the threatened thunderstorms and squalls failed to materialise and conditions were actually benign with broken sunshine and a light to moderate breeze. Conditions for the two races were very different. The opener got underway in sub 5 knots and was an entirely light airs affair, but for the second the wind built from around 8 to 14 knots.

With four of the eight scheduled races now completed there have been some interesting changes at the top of the Open/Modern Division leader board. Overnight leader SUI77 Junior, helmed by Philippe Durr, put in a second followed by a ninth and drops down into second place overall. Leapfrogging over him into the top spot is Henrik Andersin at the helm of FIN78 Evalina who finished fourth and fifth and now leads the regatta by a single point.

Patrick Montiero de Barros of POR4 Seljm hails from Cascais so might be expected to be a heavy airs specialist, but he more than had the measure of the morning’s super light conditions, winning his second race of the series by a big margin and coming seventh in race four, making him top performer of the day and moving him from fourth to third overall, three points behind Junior. Hugo Stenbeck’s SUI132 was one of several boats black flagged in race three, so despite winning race four he drops down from third to fourth overall. Stella, the newest 6 Metre competing at the regatta, built in 2017 to a Juan-K design, moves up into fifth place thanks to eleventh and second places. Jali Makela’s US105 also had an excellent day with fifth and third places and goes from thirteenth to sixth overall, a position he currently shares with Peter Harrison’s K12 St Francis IX, helmed by Andy Beadsworth.

St Francis IX was one of the boats for whom fortunes were decidedly mixed today. They were lining up for a great start in race three when they were forced to take avoiding action for one of the boats that was ultimately black flagged. As the gun went they found themselves head to wind on the line and struggling to tack and gain momentum in the super light conditions. Having been forced right things initially looked great until about half way up the beat when a big left hander came in and turned things inside out leaving them last by a huge margin at mark one. But Beadsworth and his team are renowned for their determination and they managed to fight their way back up into tenth place. They were much happier with their fourth in race four, but even that wasn’t without incident as they again had to take avoiding action when another boat misjudged her approach to the first mark and tacked right in their path. “I had no option but to take drastic action or I would have hit them in the middle of the cockpit.” explained Andy after racing. “It was a genuine error on their part as they simply didn’t see me and they immediately acknowledge their mistake and did their turns, but it lost us vital seconds.” 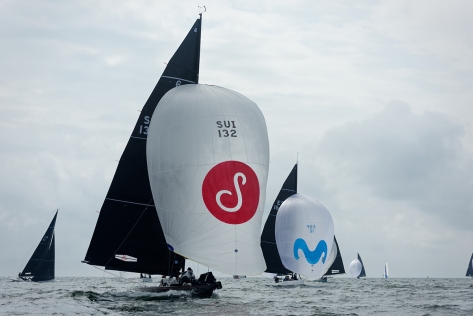 The Classic Division also saw a big shake up in the top five. Bouncing into the overall lead from fourth thanks to a first and second place is His Majesty King Juan Carlos of Spain’s ESP16 Bribon Gallant, helmed by Pedro Campos, who now leads the Classic Championship by six points. Louis Heckley’s FRA111 Dix Août also had a great day finishing fourth and third to leap up into into second overall, two points ahead of Henrik Lundberg in FIN12 Fridolin, who went into the day leading with two seconds, and added a thirteenth and a seventh today. Karl-Gustav Pihl’s FIN67 Djinn won race four but had only placed seventeenth in race three so slides down from second to fourth, three points ahead of Ossi Paija’s FIN80 Astree III who claimed a second and sixth.

One of the boats dropping out of the Classics top five is Thomas Khumann’s USA96 Hanko III who lost her rig moments after the finish of yesterday’s racing. An incredible overnight effort saw a new mast shipped in by road and the crew working through the night to get it rigged and stepped. They finished just in time to race today and to put the cherry on the cake they led the fleet around the first mark to rousing cheers from the spectators and their fellow sailors. Perhaps unsurprisingly, given their lack of sleep, they did not hold their lead and closed the day with a ninth and eleventh, dropping them into seventh overall, but still within striking distance of a podium finish. No doubt they will sleep well tonight!

Taking part in a 6 Metre World Championship is about more than just racing results though and for many here this week the key objective is to simply enjoy sailing their beautiful boats alongside like minded people and to revel in the wonderful camaraderie and active social life of the class.

Each day the docks are thronged with visitors who come to see the yachts and talk to the sailors. Here in Hanko the moorings have been organised so that each boat is placed in date order and next to their dock there is an information card which tells you the boats name and age. And of course the sailors love nothing better than to talk about their sixes so new friends are made and stories are shared.

But if only the boats could tell their own stories! Take FIN22 Merenneito for example. This 1927 Zake Westin design was built here in Hanko and represented Finland in the Scandinavian Gold Cup of 1927 at Oyster Bay on Long Island Sound – then one of the most prestigious international regattas in the world. She won two races and was one of three Finnish boats to make the finals, ultimately finishing second to May Be sailed by Sven Salen. Sven and May Be went on to win a Bronze Medal in the Open 6 Metre Class at the 1936 Olympics and Merenneito has continued to race since, becoming well known as a light airs specialist.

US81 Goose is another boat whose stories we would all love to hear. Designed by Olin Stephens and built by Henry B Nevins, Goose was the first design extensively tank tested by Sparkman & Stephens and represented a breakthrough in metre boat design. In the heyday of the class she won the Scandinavian Gold Cup in 1938,1939, 1947 and 1947 and the Seawanhaka Cup in 1957. After many years of hard campaigning across Europe and North America she was rebuilt in the Luders yard in 1957 with four layers of mahogany strips to replace the original planking. It is said that S&S would not give Luders the lines for the boat, because he was a competing designer, so before proceeding, yard workers lifted the lines from her tired hull and rebuilt from there. After the rebuild S&S acquiesced, the rebuilt Goose was compared to the original line drawings and found to be within a 1/16″ in every dimension. Goose last came to Finland some 80 years ago for the Scandinavian Gold Cup of 1939, which she won and is currently in sixth place in the Classic Division.

After racing the sailors once again enjoyed their sponsor’s hospitality at the Sinebrychoff Aftersail Party where free drinks and snacks were served. Later the fun moved on to the 6 Meter Worlds Beach Party, which took place at Hanko’s lovely art deco Casino.

The forecast for the third day of the regatta is for 5 to 7 knots from the south west with some sunshine in the morning, but a slight possibility of thunder in the afternoon. A maximum of four further races remain to be sailed with up to two races scheduled daily until Thursday 8 August. A single scoring discard will be introduced once the sixth race has been completed. Friday 9 August is a reserve day which may be used if the full programme has not been completed by Thursday evening.