It’s going to go right to the wire at the 2019 Sinebrychoff 6 Metre World Championship in Finland where three teams are now tied for the lead going into the final day of competition. Day three of the championship brought beautiful sunshine, a 6 to 10 knot south-easterly, races five and six of the eight race series, the introduction of the single scoring discard and some incredibly close racing between the 47 competing yachts.

In the Open Division Philippe Durr’s SUI77 Junior, Patrick Monteiro de Barros’s POR4 Seljm and Hugo Stenbeck’s SUI132 Sophie Racing ended the day counting 15 points apiece, whilst yesterday’s leader Henrik Andersin’s FIN78 Evalina has dropped into fourth, just one point behind them. Durr had kicked the day off with a win before going on to take an eighth in race six while de Barros was third and Stenbeck fourth in both races. Andersin had his worst race of the regatta in the morning with a ninth, but bounced back with a second. Eleven points behind the leading pack in fifth place is the Alvarez family’s ESP16 Stella, which won race five but was then disqualified from race six following a jury hearing. 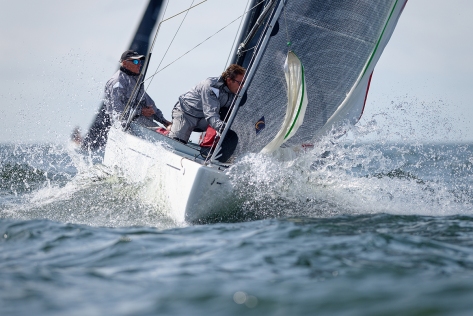 In the Classic Division His Majesty King Juan Carlos of Spain took the helm of the stunningly beautiful ESP16 Bribon Gallant today and showed that at 81 years young he’s still got the competitive edge, finishing second and then first to consolidate the boat’s overall lead. Bribon Gallant now has a seven point delta on nearest rival, Karl-Gustav Pihl sailing FIN67 Djinn, who won race five and was fifth in race six. There’s then a ten point gap back to third placed Ossi Paija aboard FIN80 Astree III on twenty-four points, who in turn has Eric Jespersen’s US81 Goose and Louis Heckly’s FRA111 Dix Août hard on his heels with twenty-six points apiece.

After racing Louis Heckly paid tribute to His Majesty King Juan Carlos and his team noting, “They are sailing superbly, but they are never aggressive. They are always just in the right place at the right time. That’s what I love about this class, it’s fun and it’s fair. We’ve got a lot of work to do tomorrow, but we’re the only boat left in the [Classics] competition with an all single figure scoreline so the podium is still well within our reach”

Conditions were near perfect with glorious warm sunshine to accompany the light to moderate breeze and as ever the boats looked simply spectacular with their clean elegant lines and the gleaming varnish of the Classics sparkling in the sun. The race committee of the Hangö Segelförening continued to do an excellent job of running the racing with good courses and start lines.

The Classic fleet in particular have been pushing the starts hard this week with numerous general recalls and once again today the race officer eventually had to use the U Flag starting penalty to get them underway. FIN77 Antje, FIN49 Sara of Hangö, S2 MayBe IV and FIN19 Puckie all fell foul of the U Flag in race five and found themselves enjoying a rather longer lunch break than planned.

One team particularly pleased with their performance today was the crew of Marenneito II, who finished seventh in race six, their first appearance in the top ten of the championship. Helmed by Timolean Caravatis this crew of friends from the Airisto Segesällskap brought Marenneito back to Finnish waters in the summer of 2018 following a major refit during the preceding winter. A 1928 Zake Westin design, she had represented Finland in the Scandinavian Gold Cup of 1928 in Sandham, which was won by the Norwegian boat Figaro V. She went on to achieve considerable success at regattas in the 1930s when the fleet in Finland was exceptionally active and was regarded as a fast boat in all conditions. She is now looking wonderful once again and clearly still has a good turn of speed! 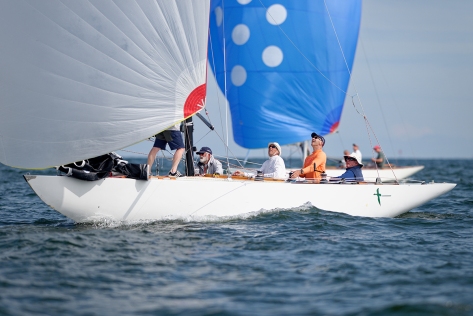 On their return from the race area the boats were once again met by the crowds of enthusiasts and spectators who gather each day to welcome them home. The docking in and out procedure is beautifully managed, and as each boat takes it’s allotted berth there are plenty of willing hands to take lines and ensure that each of these extraordinary pieces of sailing history are safe and secure for the night.

Having put their boats to bed the crews one again enjoyed event sponsor Sinebrychoff’s generous Aftersail Party hospitality before heading home for a well deserved shower and to enjoy a relaxed evening off. For the owners however, it was a case of a quick turn around to prepare for the International Six Metre Association Annual General Meeting, at which key decisions are made concerning the administration, technical management and event planning for the class.

Two final races remain to sail to complete the eight race series and decide the 2019 Sinebrychoff 6 Metre World and Classic World Champions. The weather forecast for tomorrow looks promising to complete the full programme with further light to moderate southerlies and more sunshine. There is a slight possibility of thunder storms in the afternoon and should it not be possible to complete both races tomorrow, the competition may continue into the reserve day on Friday 9 August.

Please credit all images to www.sailpix.fi